How I Changed My Mind About Women In Leadership

I’m going to lift a post I wrote for my personal blog, a place where I keep a family journal for relatives and friends to peek in on.  This is old, written in July of 2011.  Ages ago!  🙂

How I Changed My Mind About Women in Leadership

I was preoccupied this past winter with a controversial train of thought…at least it is in the conservative Evangelical world that I inhabit.  You can ask Logan or my cleaning buddy Bree just how much this was on my mind!  I’ve debated whether or not to share this here on the blog, and decided I would like to point out some excellent resources and document my train of thought for my own record.
First of all, it is important for me and others to acknowledge that our understanding is limited. As we dig into God’s word and grow in our relationship with Him, our understanding grows and we continually learn new things about God’s Truth.  Our perspectives are also shaped by our unique influences and experiences, and we often do not see how our culture, upbringing, religion, etc. have led us to certain conclusions.  As Mark Twain said, it’s not what a man doesn’t know that’s the problem. It’s what he thinks he knows that is in fact not true.  So I offer these thoughts in humility; this is what I have come to believe about women in ministry, but I may be mistaken, just as those who disagree with me may be mistaken. The important thing is that we eagerly seek God’s heart in the matter.
My winter journey began with a Bible study. In January, our “Beth Moore groupies” started her series called, “The Inheritance.” You can listen to this series and many more for free online!

In a nutshell, this 9-part series talks about what exactly we have inherited as co-heirs with Christ when we were adopted as sons and daughters by God.  According to Beth, our inheritance includes God’s Presence, People, and Property – a sphere of influence to build God’s Kingdom.  The borders of this property includes Intimacy with God, Our Pasts, Our Experiences, and Our Spiritual Gifts.  We must take ownership of each bit of our property for God’s glory, or else the Enemy will walk on it.  Obviously, that barely encapsulates 9 hours of teaching.  “The Inheritance” got me SO excited about being an “heiress”, and eager to “claim” my inheritance by fulfilling my calling.  Which got me thinking quite a bit about my calling…
…when I saw the former Dean of Chapel from Gordon College post a link on Facebook to a book he was recommending:

I ordered the book and read it within days of receiving it (a remarkable feat for a mother of three little ones!).  In this book, “Well-known Evangelical leaders—individuals and couples, males and females from a broad range of denominational affiliation and ethnic diversity—share their surprising journeys from a more or less restrictive view to an open inclusive view that recognizes a full shared partnership of leadership in the home and in the church based on gifts not gender.”  I was familiar with many of the 27 authors, so it was wonderful to read their personal testimonies on this topic.

I highly recommend this book.  It got me thinking about how my chapter would read, which is a good exercise for anyone–to examine how you have reached your conclusion on this topic.  My abbreviated chapter would go like this: I have loved the Lord and the Church for as long as I can remember.  A hierarchical view of authority in the Church had always made sense to me.  I believed that Paul’s teaching very clearly gives men “headship” in the church and home.  I never questioned that or had any doubts about that being God’s orderly design.  My dad was a pastor and I always deeply admired his ministry in the Conservative Baptist denomination.  I am very grateful that my father gave me self-confidence, first by giving me a strong name: Ruth Elizabeth (two women who inspired me as a child), and then by believing in me.

As a young woman in college, I had very little idea about what to do with myself when I grew up.  I majored in Music because I have musical abilities and I knew I could use music in church ministry.  The most exciting classes for me, however, were my Bible and Missions classes and my Music in Worship class.  I felt I had found my calling with my Worship class, and I decided to go to seminary after college.  I very clearly saw myself as investing in my future volunteer work, not as preparing for a “career” in ministry.

The question of women in leadership was a hot topic among fellow seminarians, and it had become a question in my mind, but not a burning one.  By this time, I had been mentored by two female seminary students, had sat under the teaching of numerous female scholars, had experienced years of leadership in student ministries in college, had taught the college Sunday School class at church, and had been the adult mentor/leader of a Christian ministry on a secular campus.  This ministry in particular was very exciting and fulfilling to me.  I was beginning to take note of strong women in the Bible and question the conservative position on women in ministry, but it was not a crucial issue in my life.

Just as suddenly as seminary was done, I was a new mother and had an overwhelming existence as a housewife always working part-time jobs on the side and busy volunteering my “extra” time to our local church’s music and children’s programs. While I see being a wife and mother as a sacred calling that gives me much joy and fulfillment, there has still been that nagging question in the back of my mind all along, “What am I going to do with myself when I grow up?”  As I get older, I am learning more about my particular spiritual giftings and calling.  I do not feel that being a mother is the end-all of my calling, just as being a husband and father is not the end-all of Logan’s calling.  The harvest is great, but the workers are few.  God has work for all of us to do!

There have been a few specific times since seminary that the question of women in leadership has come up for me, but I wont share the details here.  At one point, I wrote to my college mentors and was sent this excellent article called “Correcting Caricatures,” written by the president of Gordon-Conwell Theological Seminary when Logan and I were there, and who is a respected authority on the Old Testament.  A must read!

So that brings us up to this past winter.  After I read, “How I Changed My Mind,” I borrowed this book from my Aunt Linda: 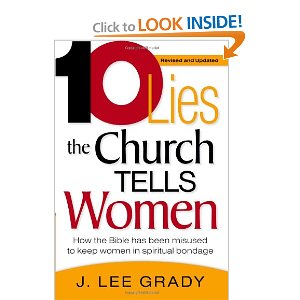 J. Lee Grady gives an impassioned plea to the Church to release women in ministry.  As a Southern Baptist pastor and journalist, and the father of four daughters, Grady’s approach is fiery.  He battles age-old discrimination against women and offers interpretations to “difficult passages” that counter the hierarchical view, as well as story after story of women in history who God has used very powerfully in ministry.  These examples were striking to me.  It began to be very clear to me that either there are thousands of exceptions to “the rule,” or there is no rule at all!
For conservative Evangelicals, there is a tendency to see an Egalitarian viewpoint as stemming from Feminism, which is a movement that has been fueled by hatred towards men.  They see Egalitarianism as an attack on God’s designed order for the Church and home.  Women who pursue public ministry are seen as inappropriately trying to seize control or power, and those who offer a differing interpretation of Paul’s teaching on women are said to be rewriting Scripture to fit their agenda.  I have become very sensitive about resistance to women in ministry, mostly because I have seen how wounding this resistance is to well-meaning women who only want to serve the Lord with their God-given giftings.  Their motivation is not hatred, anger, or power.  It is love for God and his Church.  A couple years ago, I was listening to a preacher on the radio say that he had many friends who believed in women pastors, and he was open minded about their viewpoint.  They could do it their way, but he was going to do it God’s way!  I can assure that the Egalitarians who wrote “How I Changed My Mind,” “Ten Lies,” and “Correcting Caricatures” are also trying to do things God’s way.  I hearken back to every one’s need for humility!  It is frustrating to be misunderstood and unfairly characterized by one’s brothers and sisters in Christ.
I was sharing some of my thoughts on women in ministry with “Tammy from Texas” last month, and she recommended that I read, “Why Not Women?”  So I did!  It opens with an important point.  You can have sound logic that is untrue because it is based on a false premise.  When a single verse of Scripture is singled out and then we presuppose the author’s intent and build a superstructure of belief on that foundation, it can all sound very logical but may not be true. 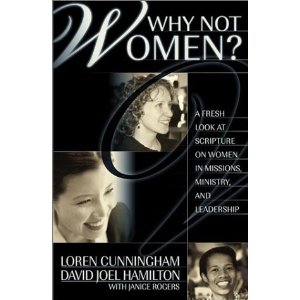 This was a fascinating book co-written by Loren Cunningham, who founded YWAM with his wife and has the rare distinction of having ministered in every country in the world and of releasing hundreds of thousands into ministry, and by David Joel Hamilton, a scholar of ancient languages and cultures who has studied this issue comprehensively and in-depth–his thesis on this subject cites over 400 sources!  It was quite remarkable to read Hamilton’s analysis on Jesus’ and Paul’s teaching on women in regards to how the ancient vs. modern reader would understand it.  The technical aspects of the grammar, syntax, etc. are clearly explained so that you come away with the understanding that Paul never intended for a hierarchy of authority in the Church or for women to be excluded from public ministry, even the pastorate.
PLEASE, PLEASE, PLEASE read this book!  Especially if you find yourself on the other side of the debate from myself.  It is important to test the Scriptures and see if what you believe is correct, and we need help to do so as ‘modern’ readers.
So here I am, at the end of this mental journey, with conclusions that place me squarely in the Egalitarian camp.  I understand that this is not an issue on most people’s minds…but I passionately believe that it is a critical issue and I hope that I have helped you in some way with your own personal journey toward understanding God’s heart in this issue.