On Being Pro-Life and Pro-March

This past Saturday, nearly three million women in the United States and millions more around the world participated in the Women’s March on Washington to protest the misogyny, racism, xenophobia and more of Donald Trump’s campaign rhetoric, in the hopes of tempering his policies now that he is president.

In this video, the founders of the Women’s March explain why they organized this event:

Sadly, this “inclusive movement” chose to exclude pro-life sponsors.  Early on, Planned Parenthood became one of two premier sponsors, and in the weeks leading up to the march, the organizers removed the sponsorship of several pro-life groups, essentialy uninviting around 40% of women–those who believe human rights begin in the womb.  A growing number of people want restrictions on abortion, as this poll shows, and these videos demonstrate:

For many, participating in the Women’s March on Washington was no longer an option after they excluded pro-life sponsors and because of the prominence of Planned Parenthood in the event.  And for many conservative Christians looking on, it was mystifying why any Christian would participate.  I have been doing my best to read and listen to different voices explaining their choice to either march or not.  One post in particular got my wheels turning a few days before the march.  Laura Martin questions the effectiveness of Planned Parenthood, reflecting on her experience as a nurse for 18 years and examining their website, asking,

Why do so many defenders of Planned Parenthood portray them as providing services that they do NOT actually offer?

Why not just honestly proclaim that Planned Parenthood’s focus is on birth control, STDs, and abortion?

Why did Planned Parenthood change their website to give the appearance that they offer prenatal care?

As a pro-life Christian, I believe that all life, beginning in the womb, is sacred and deserving of dignity, care and equal rights.  But I also believe that making abortion illegal in all circumstances is not the answer.  The legality of abortion does not change the number of abortions that occur, but the safety of women is impacted by criminalizing abortion.  After eight years of democratic policies providing easier access to birth control and better sex education, our nation’s abortion rate has hit an all-time low since the passing of Roe v. Wade.  The language Donald Trump used while campaigning to describe late -term abortion shows his ignorance at the painful dilemma parents face when forced to choose a medically-necessary late-term abortion.  For instance, this mother’s account is a must read.

Although staunchly pro-life, I am also pro-dialogue, and I am very much pro-woman.  I don’t think abortion is an issue that will go away without working together with people from different ideologies and priorities.  As on all difficult issues, I believe that, “With an abundance of counselors there is victory” (Proverbs 15:22).  The more we are polarized, the longer it will take to heal our nation.  By considering diverse perspectives, we better see the nuances of each issue and thus come to better solutions.

I have seen some lump all protesters together as “vulgar, baby-killing feminists.”  I don’t think it is fair to vilify the entire Women’s March on Washington because of disagreements on abortion or because of the actions/words/costumes of the far-left factions participating.  There were dozens and dozens of reasons why women, men, girls and boys from around the world were protesting.  Here are some posts from Christians who participated expressing their reasons for marching.

For some, being pro-life means being pro-social justice:

They're pro life and so am I. That's why we're all pro social justice. I salute the CSJs, and all Catholic sisters, who marched for justice. pic.twitter.com/b5aLOdxUGx

These Sisters are pro life. And so am I. That’s why they were marching for social justice. I salute all the women religious, and all women and men, who were trying to advocate for life and justice this weekend in their own way.

Even if some people misunderstand you. 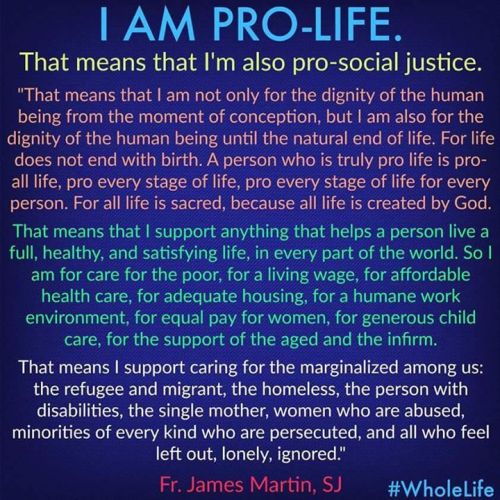 For others, being pro-life means supporting the BLM movement and speaking up against racism, blocking refugees, etc.:

For some, marching was important because of the disenfranchisement of women through patriarchy, misogyny, sexism, rape culture, etc.:

Really loved this sign from the women's march from one of our church congregants.

.@CNN is currently hosting a panel about the @womensmarch with ONLY ONE WOMAN! This is literally #whyIMarch. Do better, be more inclusive pic.twitter.com/PMsel9rC5X

I stand with the #WomensMarch because misogyny doesn't make a man "a little rough around the edges." It makes him unfit for leadership.

And for the pro-life protesters who showed up to march, they were there because unborn girls matter too:

Here are some of my favorite posts I’ve come across in the days since the march:

I am a married, Pro-Life, Republican, mother of two, and I marched. I wrote this in light of how many women are attempting to shout down women who marched. The myopia of those belittling our efforts is befuddling. I suppose this is where we have arrived – us vs. them until bruised and bloodied we all fail. To all the women who believe they have plenty of rights and they are plenty equal… how do you think you got those rights? The short sightedness and historical amnesia at play here is dangerous. It was barely 100 years ago that women were being beaten and jailed for trying to VOTE.

In A Christian’s Place is in the Resistance, Luke Edwards says,

If one more person quotes Romans 13:1-6 to prove that Christians should blindly submit to authority, I’m going to cry.

When you quote this verse, you are quoting a man who stood up against authorities over and over again. He spent at least 5 years of his ministry in prison for deliberately breaking laws that were in conflict with the kingdom of God.

Sojourners has been publishing the #WhyIMarch stories of Christians on this page.  For example, Elena Ampeire says,

My husband and I left our four young children and took two overnight busses to march in D.C. because we believe that “Love Trumps Hate.” Our faith teaches us to love and support those who are marginalized by those in power. In our society, we believe this to be women (particularly women who have been sexually assaulted), immigrants, refugees, Muslims, people who are LGBT, people with disabilities, and people of color.

Sarah Bessey captured the tension Christian feminists feel, caught in the middle of conservatism and liberalism, seeking justice and mercy while feeling ostracized by the very groups we identify as:

I identify as part of a group of people who receive their fair share of criticism.

And to be honest I think a lot of the criticism has a grounding in truth.

There are things Christians do that I find wrong and embarrassing and unholy and counter to the Gospel.

There are things feminists do that I find wrong and embarrassing and unholy and counter to the cause.

But here I am. I’m a Christian. And I’m a feminist.

I’m not fully represented by what those labels mean. They’re imperfect. And I know that the stereotypes of those labels cannot sum up the vast majority of the people I know who live within them.

Beth Allison Barr wrote a cool piece about a fifteenth century writer who challenged the misogyny of her day, encouraging us to carry on by her example.

Christine de Pizan used her voice to speak for other women. She didn’t convey much concern about who those women were or what they believed; her focus was on making a better world for all women.

As a Christian woman, I can’t help but think Christine was right. She realized that misogyny hurts all of us, whether we recognize it or not, and it especially hurts those already marginalized by economics, education, race, even religion. Christine de Pizan used what she had to fight against that misogyny; to love those who God loves; to help make the lives of women better, even the life of that “poor woman who pays too high a price”. I would like to think that her fifteenth-century vision is one that all of us–regardless of political affiliation–can still embrace.

So, I share all of this to say: if you see posts about the Women’s March on Washington, do not assume that your friend is pro-choice.  Many pro-life activists participated and many pro-life Christians support the march from home because they believe in the power of protest to effect change in the world, and there is much that needs to be changed.  Let us all continue to pray for President Trump and his cabinet, let us pray for our country, and let us continue to resist, speak truth to power, and show up and stand with the vulnerable.

Thanks for visiting TBKW blog!  We’re honored to have you here.  If you join us on Facebook, you can read articles every day about gender issues in the Church and world.

Please enjoy this funny and inspiring Ted Talk by author and activist Isabel Allende.  I’ve seen it half a dozen times over the past year and it moves me every time.