On being Pro-Life and Pro-Refugee 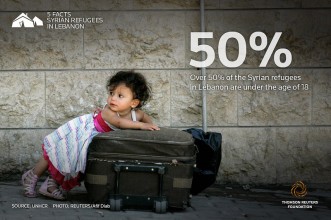 A Syrian refugee holds onto his children as he struggles to walk off a dinghy on the Greek island of Lesbos, after crossing a part of the Aegean Sea from Turkey to Lesbos September 24, 2015. REUTERS/Yannis Behrakis/File photo

A Syrian Kurdish child cries as Turkish police search their bags after they crossed the border between Syria and Turkey at the southeastern town of Suruc in Sanliurfa province on September 23, 2014. The UN refugee agency warned Tuesday that as many as 400,000 people may flee to Turkey from Syria’s Kurdish region to escape attacks by the Islamic State group. AFP PHOTO / BULENT KILIC (Photo credit should read BULENT KILIC/AFP/Getty Images)

This has been a tough week in the U.S.  Emotions are running high, friends and family are divided on national policy and relationships are falling out over it.  Many do not want their social media feeds to be full of protests and politics.  Disagreement feels uncomfortable and stressful.

Let’s stop for a minute and look into the eyes of the refugee children pictured above.

Think about the years of traumatizing war they have endured.
The lives of loved ones lost.
The only homes they ever knew destroyed.
Their perilous flights from violence, through desserts, over treacherous seas.

I cannot help but think of my own children when I see these heart-broken faces.

This national discourse is worth the pain.
We must stick with it and resist the urge to look away.

Half of all refugees are children.  Three quarters are women and children.  Asylum seekers to the US go through an intensive vetting process that lasts 18-24 months.  Once here, refugees are loaned money for six months to get their feet on the ground before they have to begin paying the US government back.  The chance of being killed by a refugee-turned-terrorist is one in 3.64 billion, according to the CATO Institute (study linked below).  In a December 2015 letter to Senators/representatives considering proposals to stop the resettlement of Syrian and Iraqi refugees in the US, former National Security officials including Madeleine Albright, Henry Kissinger, wrote:

“Refugees are victims, not perpetrators, of terrorism. Categorically refusing to take them only feeds the narrative of ISIS that there is a war between Islam and the West, that Muslims are not welcome in the United States and Europe, and that the ISIS caliphate is their true home. We must make clear that the United States rejects this worldview by continuing to offer refuge to the world’s most vulnerable people, regardless of their religion or nationality.”

As a Beautiful Kingdom Warrior, I believe every life is precious, deserving of dignity and rights.  God’s plan of redemption and shalom is for all the nations of the world.  This is my pro-life ethic.  “America First” does not honor God’s will for all of His beloved children.

This certainly is not the first instance of a policy that has hurt refugees, but the reaction to President Trump’s EO last week is frankly unprecedented and I am encouraged to see our nation discussing immigration and the refugee crisis.  I do not want to see people shutting this conversation down.  I especially want to listen to voices of people who work in immigration, who serve refugees, who know people first-hand who have come to the U.S. to begin again here.

Much of the resistance to welcoming immigrants and refugees is based on fear rather than fact.  President Trump says that he is temporarily banning immigration for our safety.  People who agree ask us, don’t you lock your doors at night?  In Trump’s defense, Franklin Graham, prominent Evangelical and son of evangelist Billy Graham, went so far as to state that immigration is not a Biblical issue.

This simply is not true.  For example, the Hebrew word ger, the closest approximate to our word immigrant, appears 92 times in the Old Testament.

“The LORD your God is the God of all gods and Lord of all lords, the great, mighty, and awesome God who doesn’t play favorites and doesn’t take bribes. He enacts justice for orphans and widows, and he loves immigrants, giving them food and clothing. That means you must also love immigrants because you were immigrants in Egypt” (Deuteronomy 10:17-19 CEB)

“You must not oppress foreigners. You know what it’s like to be a foreigner, for you yourselves were once foreigners in the land of Egypt” (Exodus 23:9 NLT)

“The LORD watches over the sojourners; he upholds the widow and the fatherless, but the way of the wicked he brings to ruin” (Psalm 146:9 ESV)

And we cannot say that Jesus does not care about refugees and immigrants.  Joseph, Mary and Jesus fled an evil, murderous tyrant as refugees to Egypt.  Jesus taught us to love our neighbor as ourselves.  He taught us to give sacrificially for the good of others.

"Do not forget to show hospitality to strangers, for thereby some have entertained angels without knowing it." -Hebrews 13:2 pic.twitter.com/fnb5Qd0pCO

There are widely-held beliefs about immigration and refugees that need to be debunked.  Here are a couple helpful info-graphics to consider:

I don’t believe that President Trump is our first president to negatively impact the resettlement of refugees in our country.  But I do believe that President Trump’s Refugee Ban is unchristian and is an affront to pro-life ethics.  It is a myth that this ban makes us more secure.  I strongly believe that any human being running from war should be welcomed and cared for.  And so I will use my voice to speak up and my dollars to assist humanitarian agencies helping refugees.  It feels like a drop in an ocean of need, but it is better than nothing.

An Appeal to Choose Fact Over Fear – Communicating Across Boundaries

The Rejection of Refugees is Manifestly Unchristian – The Brian Lehrer Show

Security is not everything – Religion News Service

We Are Followers of a Middle Eastern Refugee – Christianity Today

Terrorism and Immigration: A Risk Analysis – The CATO Institute

Trump says Syrian refugees aren’t vetted.  We are.  Here’s what we went through. –  The Washington Post