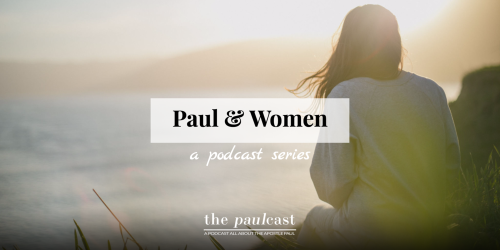 Kurt Willems, founding pastor of Pangea in Seattle, has a podcast exploring the theology of the Apostle Paul, author of 8-13 books in the New Testament (definitely 8, some others are ascribed to him but there are theories of other possible authors) and pillar of of our faith.  He has begun a series on Paul and women, from the position that Paul was an egalitarian, believing “that women have all of the possible skill, gifts, and mandate from God to serve the church in any leadership capacity” and that “women are also called to lead from their strengths in their marriages, family, and anywhere else in society.”

You can listen to episode 1: Intro and Junia here.

Here are some of my favorite bits from the episode:

On Junia: Paul says in Romans 16:7 “Say hello to Andronicus and Junia, my relatives and my fellow prisoners.  They are prominent among the apostles and they were in Christ before me.”

In upcoming episodes, Willems will be discussing particular passages in which Paul discusses women in ministry.  Subscribe and give him a positive review so others will come across this great podcast!

Thanks for visiting The Beautiful Kingdom Warriors!  We love sharing egalitarian resources with you.  Fight the good fight with us by passing along our posts to your friends and followers!

And visit us on Facebook, where we post articles from around the web each day tackling issues of women in ministry, gender inequality, people who inspire us, etc.  Feel free to contact us through FB messenger anytime, if you have a post you would like us to share or if we can help you in any way.

You are enough, your voice matters, and we love you!

This entry was posted in Ruth's Posts and tagged Dan Kimball, Jesus Feminist, John Chrysostum, Junia, Junia is Not Alone, Kurt Willems, Paul, Paulcast, Romans 16:7, Sarah Bessey, Scot McKnight, They Like Jesus but not the Church. Bookmark the permalink.