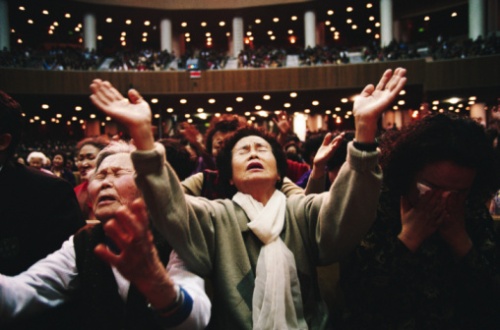 I recently listened to Francis Chan on the Phil Vischer Podcast, episode 227, sharing about his current ministry, the NEO House Church Network:

Popular author and preacher Francis Chan walked away from his megachurch to try something completely different – a series of tiny house churches in inner city San Francisco.  Why the change?  And what can we learn from his big experiment in going “small?”  This week on the podcast with Francis Chan – is the future of the church tiny??

At the end of the podcast, he mentioned that the NEO House Church Network is complementarian, reserving pastoral leadership to men.  It is a part of The Christian & Missionary Alliance (complementarian) and is also affiliated with The Gospel Coalition, which holds complementarianism as a key doctrine.

I love what Chan is doing, building a house church network that gives thousands of people the opportunity to minister in intimate and committed small communities. Mobilizing the priesthood of all believers should be the ultimate goal of a pastor.  And Chan is an amazing minister of the Gospel that I admire.  So I thought he would benefit from this quick story about a pastor that mobilized the women in his church to start house churches and they grew to be the largest church in the world.

“Don’t be afraid to empower women,” says the pastor of the world’s largest church.  Churches are wrong not to let women become spiritual leaders, David Yonggi Cho told church leaders at a “Discipling a Whole Nation” conference in Italy.  “If you ever train the women, and delegate your ministry to them, they will become tremendous messengers for the Lord.”

Most leaders at Cho’s Yoido Full Gospel Church in Seoul, Korea, are women.  The 700,000-member congregation is divided into 50,000 cell groups that meet in homes, and about 47,000 cell leaders are women, he said.  Of the church’s 600 associate pastors, 400 are women.  “In ministry they are equal with men,” he said.  “They are licensed.  They are ordained.  They become deaconesses and elders.”

Cho adopted the cell church principle in 1964 after he collapsed from exhaustion trying to minister to his then 3,000-member congregation.  His male leaders balked when he told them to divide the congregation into cells that meet in their homes.  “They said, ‘Fine, but we are not trained to do that and we are not paid to do that.  Why don’t you have a long vacation?’ This is the Korean way of saying ‘Why don’t you resign from the church?’ ”

When he asked the women leaders to do it, they said, “Teach us, pastor.  We will do anything for you,” he said.  The church grew from 3,000 to 18,000 in the next five years.  The cell churches started new cell churches and more lay leaders got involved in ministry, Cho said.  “It is the will of God to have a growing church.”

Over time, using this cell principle, Cho’s church grew to over 1 million people.  Sadly, Cho has been convicted of embezzling from his church.  It is common for one person holding much power to be corrupted.  This should not diminish the impact of Cho’s female cell church pastors though!

Matthew 7:16 tells us, “You will know them by their fruit.”  The fruit of empowering women in ministry at Yoido Full Gospel Church in South Korea was unprecedented growth.  Church planters like Francis Chan should take note and include women in leadership.

Further reading:
The Junia Project has a great article on Why Women Make Great Church Planters.

The MissioAlliance has several must-read articles on Women in Church Planting.

Thank you for visiting The Beautiful Kingdom Warriors, where we fight for our rightful place beside our brothers in Christ’s reconciling and redeeming work on Earth. “Like” us on Facebook if you’d like to read links from around the web each day on gender issues in the Church and world.

2 responses to “Francis Chan, the NEO House Church Network, and Women in Leadership”