It’s been nearly a week since the story 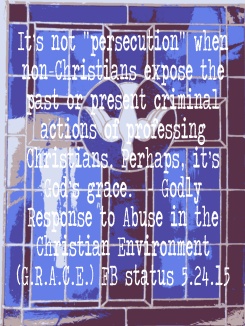 broke that Josh Duggar had molested five girls, including his sisters, as a 14 year old boy – the youngest victim being only 4 years old at the time.  Many articles have been written (shared hundreds of thousands of times) in defense of Josh and his parents, Jim Bob and Michelle.  This is troubling and infuriating because these articles demonstrate the widespread lack of understanding in the U.S. Church regarding the seriousness of sexual crimes, and are examples of the typical Christian response to sex abuse  – to deal with it in-house (even when church leaders are mandatory reporters), to minimize the abuse (thereby compounding the trauma of the victim), and to cover up the “mistakes” (rather, CRIMES) for the sake of saving face and the reputation of the particular church, organization or family.  Many Christians have demanded that we focus on forgiving Josh and leaving this story in the past, but I believe we should take this opportunity  to discuss and educate Christians on the proper response that is to be made to allegations of sexual abuse.

Let me reiterate – the critical importance of this story is that this is how churches overwhelmingly respond to and mishandle sexual abuse – by handling in-house like any other sin issue, rather than treating it like a crime and getting the victims the help they need.  How do Christians typically treat victims?  By silencing them and rushing the process of forgiveness and healing for the sake of protecting the reputation of the “Gospel” (i.e. organization).

My family lived in S.A. with New Tribes Missions for three years when I was a kid, during which time three pedophiles were sent home but not reported to authorities.  In the past few years, victim after victim have come forward about systemic sexual, physical, emotional and spiritual abuse of children in the N.T.M. boarding schools around the world (I previously wrote about this last year, “Reporting Sexual Abuse in Christian Communities”).  There have also been scandals recently with sexual abuse coming to light in very conservative schools and organizations, like Pensacola College, Bob Jones University, Bill Gothard of the Duggar promoted A.T.I. homeschool organization, Doug Phillips of another Duggar promoted organization, Vision Forum, and the list goes on and on.  I have followed multiple blogs that are shedding light on abuse in Christian environments and it is a much bigger issue than many Christians are aware (for starters, visit G.R.A.C.E.).  I think it’s hugely important to shine a light on this issue of mishandling sexual assault so that the tide will turn and children will be safer in our churches.  Here are some very helpful articles that do just that:

Have you read Matt Walsh and other conservative Christian authors summarize the events leading to the Duggar scandal?  Then you do not have an accurate picture of what went down.  Libby Anne, a former Quiverfull wife with inside knowledge of the Duggars’ extreme patriarchal sect (who wrote another insightful piece on the Duggars called “Carefully Scripted Lives: My concerns for the Duggars” in February 2012), here gives an excellent analysis of the police report.  In short, the parents knew Josh was groping his sisters for a year before it happened outside the family, at which point Jim Bob spoke to their church elders (who are in fact mandatory reporters), and they agreed that the Duggars could send their son to a friend for a few months where he did manual labor and read his Bible, but did not receive any counseling or therapy.  I also would assume that the girls did not receive counseling. When he came back Jim Bob took him to a state trooper (and personal friend…who has since been sentenced to 56 years in prison for child pornography) who did not make a report (another mandatory reporter not following protocol), but gave Josh a stern talking to. There was a letter detailing the incidents that was discovered and leaked to the Oprah Winfrey show a couple years later, whose producers reported it to the police but it was past the three year statute of limitations (THREE YEARS?!) at that point and no charges were filed.

You should really read this post.  Libby Anne shares 11 lessons to be learned from this scandal, and concludes by saying,

I still feel weird about posting this because of the gossipy angle so much of the media is giving it. So, I’d like to make a suggestion. When you see people talking about this story, whether on facebook or in person or in a comment section, steer the conversation toward the more substantive issues. Let’s use the attention the tabloids and other news sources are giving this story to educate the public about the problems with dealing with sexual molestation in house, the importance of sex education, and the dangers of judging the character of a family by outward appearances alone.

And while you’re at it, please remind people to protect the identities of the victims.

And let’s not gloss over the victims here – although Josh is being painted as the victim in many conservative Christian circles, there were five little girls traumatized by his molestation.  As G.R.A.C.E. posted on Facebook tonight,

THOUGHTS ON LEARNING OF THE DUGGAR SCANDAL – anonymous post from a Bob Jones University student.

These young women who were molested are now in the public eye, when I’m sure they just want to run away from the world and disappear. These girls have been told that they need to slap a sticker with the word “Forgiveness” on their problems, and move on, and pretend that nothing has changed.  We are reminded how wonderful it is that their brother found mercy and forgiveness and the power to change.  Their abuser has said, “I understood that if I continued down this wrong road that I would end up ruining my life,” without acknowledging that great damage has been done to the lives of his sisters.  The parents find strength in saying that God used this to draw each of them closer to Him.    These girls somehow become like the family’s sacrificial lambs; their purity and innocence damaged so their brother can learn lessons and their family can grow closer to God.  The family moves on as if it never happened. He was just a child who made a mistake.  It’s all good now.  It’s all in the past.

Let me tell you a story about the devastating silences of youth and the messiness of redemption.

My brother? By the measures of this life, he is successful. For all intents and purposes, redeemed from his “youthful indiscretion.”

As for myself? I’ve fought tooth and nail to overcome childhood devastation that left me emotionally abandoned by my family. Left to fend for myself. Somehow I’ve managed my own “small” successes. In trying to piece together my life, I earned a few advanced degrees, one from a prestigious top 10 university. Yet somehow, despite all my hard work and efforts to escape a painful past, I find myself homeless… on Medicaid and food stamps… carrying all the accompanying shame. AND perhaps the most devastating of all, the one thing that leads me EVERY TIME to the absolute brink of self-destruction: a keen awareness of my lack of belonging anywhere. If my own family hung me out to dry, where else is there to go…who else is there to go “home” to? It’s the one place you are supposed to feel safe and wholly a part.

Here is a MUST READ:

THE DUGGARS: HOW FUNDAMENTALISM’S TEACHINGS ON SEXUALITY CREATE PREDATORY BEHAVIOR – by Diary of an Autodidact

This is a fascinating article that makes many excellent observations, from a former Gothardite (whose teachings are promoted by the Duggars) and criminal lawyer who has worked on multiple cases involving fundamentalist families and similar circumstances.  The intention of his article is to demonstrate that fundamentalist teachings on sex result in young men acting out in predatory ways, who would not otherwise be predators.  An important point that he makes is that Josh may not be a pedophile at all.  This could be another of many, many examples of bad fruit coming from bad teaching.  I found this article to be particularly helpful in understanding the underlying issues at play.

And a few more good posts in case you want to keep reading:

ANNA DUGGAR AND THE SILENCING POWER OF FORGIVENESS – Libby Anne

I’M TIRED OF TALKING ABOUT BILL GOTHARD AND THE DUGGARS – Micah J. Murray

JOSH DUGGAR AND THE BONDAGE OF OUR SOULS – Kathy Vestal

THE DANGERS OF LIFE IN A MALE DOMINATED SYSTEM – Susan Cottrell

THE FIRST THING CLERGY SHOULD DO WHEN SUSPECTING SEXUAL ABUSE (OR ANYONE, REALLY) – Benjamin L. Corey

WHAT DID JOSH DUGGAR’S COUNSELING LOOK LIKE? – Libby Anne

WHY RELIGIOUS HYPOCRISY IS UNAVOIDABLE AND WHY ITS UNACCEPTABLE – John Pavlovitz

WHY VIRGINITY IS NOT THE GOSPEL – Carolyn Custis James

Thank you for visiting TBKW!  You can “Like” us on Facebook, where we post articles everyday pertaining to gender issues in the Church and world.  And Follow our blog so you don’t miss any posts!  God bless!