I delivered my first-ever sermon last year, and thought I’d share the text here.  The experience of preparing and delivering a sermon was equal parts nerve-wracking and exhilarating.  I felt so blessed by the entire process.  Because I had zero experience and education in sermon preparation, I sought out lots of help and am indebted to the pastors and mentors who read my sermon and gave me notes.  It could only be ten minutes long, so it’s not a difficult read.  Without further ado, here is my sermon on Matthew 19:27-20:16.

There’s a question I’ve heard several times lately that got me thinking.  I watched a YouTube video of a popular evangelist, who was being criticized for her personal jet and large mansion, and she was defending her lavish lifestyle.  She said, “Don’t I deserve a little luxury when I work so hard?”  A family member going through a bitter divorce recently said to me, “I was always a good wife.  Don’t I deserve to be treated better than this?”  And a man dying of cancer asked Logan, “What in the world did I ever do to deserve this?”

When I was thinking about this question, I realized I’ve asked myself the same thing, a lot!  When we moved to my hometown in Maine, I expected my church family to recognize the value of my seminary education.  I was hurt when I wasn’t nominated for the Christian Education board, even though I had a Masters in Educational Ministries.  I felt I deserved recognition for my hard work.

Similarly, I’ve done a lot of waitressing over the years, and I always do my best to give good service.  I have an expectation of what my tip will be, according to the tab, and depending on the tip, I’m either satisfied, pleased, or sometimes, disappointed.

Also, I get a lot of satisfaction from studies that detail the monetary value of all of the jobs that a Stay-at-Home parent does.  If I was being paid for my long days, sleepless nights, laundry service, tutoring, meal preparation, house cleaning, and life coaching, I’d be making a six figure income!

So, there’s three examples and I could give many more of ways that I’ve measured my life and decided what I deserved, and have been disappointed when my expectations and my reality didn’t match up.  And I’m sure some of you think like this too.  Maybe you’ve Googled the average pay for your line of work, to see if you’re receiving a fair salary.  Or you’ve said to yourself, “I deserve better than this”, when your circumstances were difficult.  We all have an expectation of what sort of reward or recognition or life circumstance is fair, and it can be really difficult to understand when our expectations and our reality are not matching up.  Really, we’re wondering if it’s worth the effort.

Well, the good news is, we are not the first people to struggle with this.  In fact, Jesus’ closest friends, his chosen twelve in his inner circle, were beginning to look around at their circumstances, and they began to worry, is this going to come out in our favor?  Here they had all left their jobs and families, to live in poverty as wandering apprentices of Jesus.  So they asked him, “What will our reward be?”  Let’s turn to Matthew, starting in chapter 19:27, to hear how Jesus replied.

27 Peter answered him, “We have left everything to follow you! What then will there be for us?”

28 Jesus said to them, “Truly I tell you, at the renewal of all things, when the Son of Man sits on his glorious throne, you who have followed me will also sit on twelve thrones, judging the twelve tribes of Israel. 29 And everyone who has left houses or brothers or sisters or father or mother or wife or children or fields for my sake will receive a hundred times as much and will inherit eternal life. 30 But many who are first will be last, and many who are last will be first.

20 “For the kingdom of heaven is like a landowner who went out early in the morning to hire workers for his vineyard. 2 He agreed to pay them a denarius for the day and sent them into his vineyard.

3 “About nine in the morning he went out and saw others standing in the marketplace doing nothing. 4 He told them, ‘You also go and work in my vineyard, and I will pay you whatever is right.’ 5 So they went.

7 “‘Because no one has hired us,’ they answered.

“He said to them, ‘You also go and work in my vineyard.’

8 “When evening came, the owner of the vineyard said to his foreman, ‘Call the workers and pay them their wages, beginning with the last ones hired and going on to the first.’

13 “But he answered one of them, ‘I am not being unfair to you, friend. Didn’t you agree to work for a denarius? 14 Take your pay and go. I want to give the one who was hired last the same as I gave you. 15 Don’t I have the right to do what I want with my own money? Or are you envious because I am generous?’ 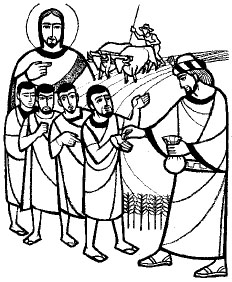 So, the disciples were asking Jesus what sort of reward they would receive for their hard work and sacrifices, because they wanted to know if Jesus’ payment would line up with their expectations of what they deserved. Jesus’ answer to them is – The first will be last, and the last will be first.  Then Jesus uses the Parable of Equal Wages to illustrate the meaning of this principle, and he repeated the principle one last time for clarification.  But I think the meaning of this principle and this parable was hidden from the disciples for some time.  Let me unpack the parable a little bit and tell you when it was that the disciples really got it.

The setting was a society where unemployment meant starvation.  A day-laborer would have been someone without their own land to work.  So the day-laborers were dependent upon local landowners for employment just to feed their families with their days’ wage.  The men who would have been idle, or rather, had not been hired by any other land owner, would have been the weak, infirm, disabled, elderly, and other targets of discrimination, like criminals or anyone with a bad reputation.  At the end of the parable, the full-day workers didn’t complain that they had been cheated, but that the one-hour workers had been made equal to them.

A just God, then, is inclined to show special generosity to the poor and outcast.  No-one was underpaid; just some were treated with ‘unreasonable’ generosity.  And by that extravagant act of compassion, the landowner demonstrated something about the one-hour workers’ value and worth.  And this act of kindness denied the full-day workers their claim to superiority.  It was only natural for those who had worked all day in the heat of the sun to feel resentment.  If you’re honest, you’ll admit that you’re sympathetic to their complaint, because that’s our natural, human perspective.  But that sympathy reveals how loveless, merciless and ‘under law’ we really are.  Similar to the day-laborer’s poverty, we are spiritually destitute, in need of God’s ‘unreasonable’ generosity!

The hard truth is, no one deserves eternal life.  Think about it this way.  When you drive to work or to the grocery store, if you follow the rules of the road carefully, you don’t get a special reward when you reach your destination.  You have merely fulfilled your obligation to the law of the land.  Are we not likewise obligated to live in perfect obedience to our Creator?  We see so clearly all the things we do for God, or that we’ve lived a ‘good life,’ and we feel we deserve something for all of the times we haven’t just lived for ourselves.  But God isn’t looking at what we’ve done, he’s looking at our hearts.  His primary concern is that we are loving Him and loving others more than ourselves.  I’m a good person, I’m a good wife and mother, a good Christian.  But if I’m being perfectly honest with you, my life has been mostly lived for me and a little bit for God and others.  And honestly, my efforts and sacrifices can lead to a puffed up, superiority complex.  There’s no room for me to be proud.  I need to see myself for what I really am – a one-hour worker, not an all-day laborer.

There’s only been one person in all of history that has lived his entire life perfectly, always deferring to the will of his Father and to the needs of others.  He never achieved any status or riches in his lifetime, but was willing to live in poverty and to be ridiculed and shamed, to die between two thieves, pouring himself completely out as a gift of salvation for us!  The twelve disciples who had been asking what kind of reward they would receive for following him, hid in shame while he was being crucified.  Only when Jesus rose from the dead, and they realized what he had done for them, did his disciples stop worrying about fairness and receiving special honor.  They realized they had received unreasonable generosity!

You see, Jesus lived the life we should live and died the death we should have died – but then he doesn’t say to his Father, why are you giving those guys eternal life?  Jesus doesn’t begrudge his Father’s generosity towards us – he loves us so much, he shares his inheritance in heaven with us as brothers and sisters.  We are deeply valued and deeply loved, and not for our meager hour of work.  God sees our spiritual poverty and looks at us with compassion, and then blesses us with ‘unreasonable’ generosity!

That is God’s pay scale.  God’s grace is not limited by our ideas of fairness; his gifts are far beyond what anyone deserves.  In his book, “What’s So Amazing About Grace”, Philip Yancey writes, “We risk missing the story’s point: that God dispenses gifts, not wages. None of us gets paid according to merit, for none of us comes close to satisfying God’s requirements for a perfect life. If paid on the basis of fairness, we would all end up in hell”.

I love how Pastor Timothy Keller puts it, “The Gospel is—we are more sinful and flawed in ourselves than we ever dared to believe, and at the very same time we are more loved and accepted in Jesus Christ than we ever dared hope.” So let us not get puffed up with feelings of superiority or entitlement, but always remember that we have received unreasonable generosity. Let us give thanks to God for not paying us what we deserve, but far, far better pay than we can even imagine.

This entry was posted in Spiritual Growth and tagged Christian, generosity, God, Gospel, GRACE, love, Matthew 19:27-20:16, Philip Yancey, Sermon, The parable of the Equal Wages, The Parable of the Workers in the Vineyard, Timothy Keller, Women in Ministry. Bookmark the permalink.