Last June, my husband Logan and I attended a church conference in the Philadelphia area.  The speaker that most inspired and excited us was Shane Claiborne, sharing about his ministry with The Simple Way among Philly’s poorest and most vulnerable people.  Here is a similar talk on YouTube.  If you watch it, be prepared to weep at the end.  So powerful. 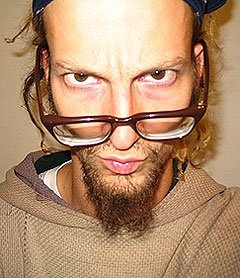 After his talk, we headed back to his table and bought three books: The Irresistible Revolution: Living as an Ordinary Radical, Common Prayer: A Liturgy for Ordinary Radicals, and Red Letter Revolution: What if Jesus Really Meant what He Said?.  We got back to Maine and were thrust into a stressful, hectic summer season.  Between work, parenting small children, and getting our house ready for the market, I was only sleeping 5 hours a night for months and months on end.  Although I couldn’t find time to read Claiborne’s books, I was watching his YouTube videos while I was working.  I’m telling you, this is the Christianity that I want!  Claiborne’s life has the distinct aroma of Jesus about it. 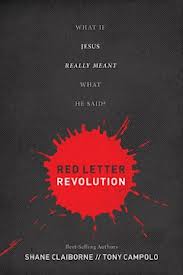 When we went to spend two weeks with family over Christmas, I jumped on the opportunity to finally read one of his books.  I had grabbed Red Letter Revolution and practically devoured it.  This book is co-written with Tony Campolo and is formatted as a discussion between Shane and Tony regarding a movement they are trying to spark for a Christianity that images Christ, giving prominence to the red letters  of the Bible.

In this essential manifesto, best-selling authors Shane Claiborne and Tony Campolo envision issue after contemporary issue in direct light of the Bible’s “red letters.”  The result is a startling look at contemporary Christianity and an inspirational reawakening to the gravity of the words and deeds of Jesus…Red Letter Revolution is a timely call back to the true, radical fundamentals of Christianity.  [dust jacket description]

First thing that jumps out at you when you open this book, is four pages of “Praise for Red Letter Revolution,” from the likes of Bono, President Jimmy Carter, Archbishop Desmond Tutu, Eugene Peterson, Phyllis Tickle, etc.  The Contents page shows a division of the book into three parts: Red Letter Theology (On History, Community, the Church, Liturgy, Saints, Hell, Islam and Economics), Red Letter Living (On Family, Being Pro-Life, Environmentalism, Women, Racism, Homosexuality, Immigration, Civil Disobedience, and Giving), and Red Letter World (On Empire, Politics, War and Violence, National Debts, the Middle East, the Global Church, Reconciliation, Missions, and Resurrection), and a Conclusion: A Vision for A Red Letter Future.  This book is jam-packed with Claiborne and Campolo’s thoughts on how Jesus’ words should impact the way we view contemporary issues facing the church and world.  And frankly, much of what they say is in direct contrast to Western Christianity’s cultural stances.

Whenever the word “evangelical” is used these days, a stereotype comes to mind.  Whether or not that image is justified can be debated, but there is little argument that the word “evangelical” conjures up an image of Christians who are anti-gay, anti-feminist, anti-environmentalist, pro-war, pro-capital punishment, and conservative Republican. [Intro: pg. XI.]

Although Shane and Tony come from different generations, different perspectives on community and politics, etc., they have found a similar passion for “taking action to stop wars, defy unjust political structures that oppress the poor, speak out for the oppressed who have no voice, and endeavor in general to change society into something more like what God wants for it to be” (pg. XIII).  This book is an “invitation to join a movement that is about demonstrating God’s goodness to the world” (pg. 9).

I probably could have highlighted this entire book.  I tried to restrain myself to underlining only the most pivotal sentences, but I still marked up every page.  There are also lots of stars and check marks in my margins.  I thought for TBKW blog, I would summarize their chapter on women.  This book is valuable for framing a Christ-like perspective on all contemporary issues, but I need to narrow my review or it will turn into its own book! 🙂

Tony begins this discussion by saying that the roles that women can play in church life is one of the most divisive issues among evangelicals, Anglicans and Roman Catholics.  Tony says denying women the right to be preachers and teachers is diminishing their dignity and thus dehumanizing women.  Red Letter Christians point out that Jesus affirmed women.

He invited Mary, the sister of Lazarus, to sit with his male disciples and study the Torah (Luke 10:38-42).  He broke societal expectations when he sat alone with a Samaritan woman and conversed with her on religious issues (John 4:4-26).  He broke rabbinical law when a woman who was menstruating touched him (Matthew 9:20-22).  The author of Galations makes it clear that “in Christ” the religious hierarchy differentiating men and women has been abolished (3:28). [pg. 107]

Shane points out that the Scriptures are full of women prophets, leaders and disciples.  “Ministry is a matter of call and gifting, not gender, and it would be a great disgrace if we lost half our gifted leaders in the church because we misread a few texts” (pg. 108).

Our brother Ben Witherington has said it well: “It was the original curse, not the original blessing that was pronounced in the following form-‘your desire will be for your husband and he will lord it over you.’  The effect of the Fall on human relationships is that ‘to love and cherish’ became ‘to desire and to dominate,’ which entailed unilateral submission of females to males, something that was never God’s original creation plan. [pg. 109]

You wont find a single statement in Genesis 1-2 about the silence or subordination of women to men.  Eve is simply the necessary compliment and suitable companion to Adam.  What you will find are statements making clear the inadequacy of the man without woman who is the crown of creation, for the text says ‘it is not good for man to be alone.’  Patriarchy is not an inherently good thing, an inherently God thing, and it should not be repristinized and set up as a model for Christian ministry.” [Ben Worthington quote continued in Notes: pg. 264-265.  Here is the link to his full article.]

Shane and Tony make a really excellent point in this chapter – men and women are both fully human.  Jesus was at times “feminine”, i.e. weeping, and also “masculine,” i.e. flipping tables.  These cultural norms limit our full humanity.  “In our cultural value system, we have divided up human traits between the sexes and consequently have denied each sex a part of its humanity” (pg. 110).

Shane and Tony give full support to women being leaders in the church.  They cite the partition in the ancient temple that had divided Gentiles and women from the Jewish men being broken down by Christ (Ephesians 2:14).  Philip’s three daughters are acknowledged as being prophetesses, i.e. preachers (Acts 21:8-9).  In Romans, Paul writes about Adronicus and Junia, a man and a woman, as fellow apostles.  In Ephesians 4:11, there is no indication that the gifts of the Spirit are allotted according to gender.  “Paul tells all Christians–and that includes women–that not to exercise the gifts that are within them is to negate what God wills (I Timothy 4:14)” (pg. 112).

Tony also shares how his mother was a wonderful storyteller and had always wanted to be a preacher, but because she could not, she lived out her calling through him.  “I find it sad that she had to live out her desire to be a preacher through her son because she was not allowed to live it out herself, and it is partly because of what happened to my mother that I am a strong advocate of women being preachers and teachers in the church” (pg. 113).  Here is an interview in which Tony goes into more detail on his views of women in leadership and the story of his mother.

Tony and Shane describe themselves as male feminists, and acknowledge that sexism runs deep in our culture.  “We have an oppressive cultural value system that forces women to think that they are supposed to conform to a society-prescribed weight and have a particular sized bust…In America, women are conditioned to think that they have to look twenty-three forever” (pg. 113).  They link the sexualization and objectification of women as the root of sex trafficking.  “We have to deal with the ugly reality that our society is indoctrinating men with evil concepts of what should turn them on sexually” (pg. 115).

The issues get even more complex globally.  In extreme cases, women are mistreated, or even tortured by being forced to undergo female circumcision.  We must know that these things matter to God.  How women are treated is as important to God as how men are treated.

And while we’re at it, we might also say that the wages that women get paid matter to God too.  Women do so much of the work and get so little of the money and credit…Four in ten businesses worldwide have no women in senior management and that women earn less than men in 99 percent of all occupations.  [pg. 116 – 10 Suprising Statistics on Women in the Workplace]

It’s probably needless to say, but I HIGHLY RECOMMEND this book!!!  I was so fired up after reading it.  Let’s join the Red Letter Christians in revolutionizing Western Christianity to a more Christ-like reality!  Give this book a read and see if some of your perspectives aren’t challenged.  Change is good, my friends!